The Southsea Shakespeare Actors are finally back in rehearsal again ready for our first show in over 18 months.

Unfortunately our production of the Two Gentlemen of Verona which was due to be performed in March 2020 and then moved to March 2021 had to be cancelled once again.

However we are back and with a new venue that we’ve not used for a production before. We’ll be performing at the Prisoner’s Theatre at Porchester Castle from Wednesday 28th to Saturday 31st July 2021.

Our much anticipated Spring show of Two Gentlemen of Verona, which had to be unfortunately postponed, is set for 31st March – 3rd April 2021 at the Square Tower, Portsmouth.

Fingers crossed we won’t have a worldwide pandemic to battle with this time.

A reunion is set for the cast to meet up again virtually to slowly start the process of getting the show back to where it was. This reunion will include a read through and be a great opportunity for the team to re-kindle their love for the show.

Further to the Government’s recent announcement surrounding Covid-19 this evening, we have regrettably decided to postpone all performances of ‘The Two Gentlemen of Verona’ scheduled for this March.

The health and safety of our audience members is always our top priority and it’s therefore imperative we follow the guidelines surrounding social distancing and public gathering outlined by the Government today.

Ticket refunds will be processed automatically. We are taking immediate steps to ensure this happens as soon as possible.

If you have any questions surrounding this announcement, please feel free to contact us via the usual channels, or email southseashakespeareactors@hotmail.co.uk.

We sincerely apologise for any inconvenience this causes. We very much look forward to welcoming you to the production in the not too distant future, when it is safe to do so.

Well no it won’t!  There’s only one dream that will do, and that is our production of A Midsummer Night’s Dream, which hits the stage from Wednesday 23rd November.  Click on the link for tickets.

No, I couldn’t think of anything either……………………except the SSA of course!  Your favourite Shakespeare company is heading into a very busy period, so hop on board the Bard Bus (I apologise, that’s terrible) and hold on tight.  First it’s the gerbils, with Gnawing on 28th September at Titchfield Community Centre.  There will be 4 blokes and 1 woman in gerbil costumes, an open bar, a hilarious script, and it’s even got a warning for adult content – what more could you want!

Hot on the heels of something that Shakespeare most definitely wouldn’t have written comes one his most popular works – A Midsummer Night’s Dream.  Rehearsals are in full swing, and it promises to be a magical production.

As observant readers will have noted from my last post, our Spring 2020 play will be Two Gentlemen of Verona, so plenty of info to come on that.  What you won’t know is that the 2 gents will be followed by the SSA appearing at Portchester Castle!  In a recent announcement from that nice Mr Nick Downes, it was confirmed that we have secured a summer slot for an as-yet-undecided production in this beautiful location, which promises to be hugely exciting.

The next 12 months promise to be full of action, so keep visiting this site to keep up to date with everything we will be doing.

So it’s official!  Our Autumn 2019 production will be A Midsummer Night’s Dream, directed by Paula Bartlett and Aaron Holdaway.  The important dates for now – Tuesday 21st May at 8pm for the expo (straight after the AGM), auditions 1 on Tuesday 4th June at 7.30pm, and auditions 2 on Wednesday 12th June, also at 7.30pm.  All of this takes place at our HQ in Omega Street.

Talking of the AGM – it’s at 7.30pm on Tuesday 21st May at HQ, if you are a member, or interested in joining us, then please don’t miss it – and then stay on for the MSND expo!

Finally advance notice – Rob Bartlett has been busily scribbling away and the rodents will be returning. Yes, it’s time for Gnawing: The Gerbils Return (this may not be the official title!).  The provisional date for this magnum opus is Saturday 28th September, presented at Titchfield Community Centre.  More new as we get it…………. 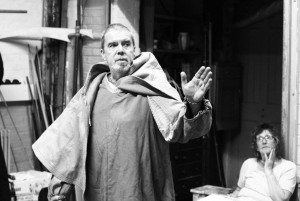 Dear readers – for a good few years the SSA has been renting a hall in North End to house our scenery, props and costumes.  Unfortunately that arrangement is coming to an end in the next few months, and we really  need to find a new location as this stuff is very precious to us.  We don’t need a full building, or anything fancy like windows (!), just somewhere secure that we can get access to and that has enough room – it can be an unused room in a building, an outhouse etc.  Commercial rents for garages and similar are out of our league – we are a small charity – but we are happy to pay for the space and to keep it clean, tidy, and if required, to decorate it etc.  If you can help, or know of someone else who can, please email us on thesouthseashakespeareactors@hotmail.co.uk

The Tempest has come and gone, carried away on the winds of change (see what I did there – tempest, wind, wind, tempest…………….. oh never mind), and what a fantastic production it was.  Full of originality, sound and colour, with a stage full of talented actors, the play garnered praise from everyone who saw it.  To top it off, we’ve now got 3 nominations in this year’s Portsmouth News Guide Awards!  The entire production of The Tempest has been nominated for “Best Amateur Production”, whilst Sarah Ash (Prospera) and Susie Rowland (Ariel) have picked up nominations for “Best Amateur Actress”.  Huge congratulations to everyone involved, to Sarah and Susie, and to Aaron and David for creating and presenting such a wonderful piece.  Please get voting, it would fantastic to see the SSA pick up some awards – link here

To prove what a talented lot we are in the SSA, I must make mention of our members who have picked up nominations for work with other theatre companies in the area – Vin Adams and Nick Downes for Waiting for Godot, Katie Watson for Hedda Gabler and Faye Williams for Constellations.  A massive “well done” to you all.

Meanwhile back in SSA land, rehearsals have already begun for our March 2019 production of Besieged, Vin Adams’ original work about Portsmouth in the English Civil War.  It’s shaping up to be an excellent production, and tickets are already on sale, so please get buying.

On a final, year-ending note – it was great to see so many members at last week’s Christmas party, with several acts demonstrating acute comedy timing, finely tuned singing voices and a complete mastery of the crafts of magic (I may be exaggerating a tad here….).  A Merry Christmas and Happy New Year to all who are in, who watch or who simply like the SSA.  It’s been a great year, and we’ll see you in 2019 for some 17th century shenanigans